against each other, what did we conclude the main differences were between the two models? 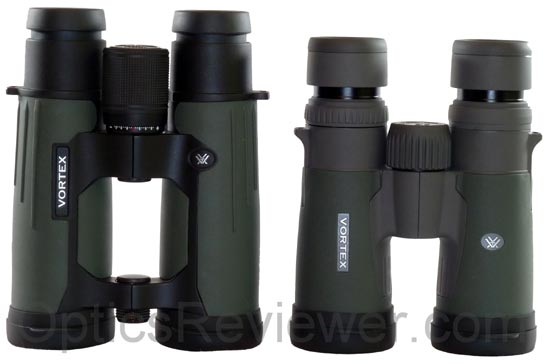 Why would Vortex have gone to the effort to design and bring to market a binocular only to turn around and quickly replace it with an update? In an industry where a model is typically expected to stay on the market in terms of years, rather than months, it's a reasonable question.

When we bought our 2011 model Razor HD during August 2011, we quickly noted that the serial number was HD00123. We understood that to mean that there were 122 Razor HDs produced before ours. You may be saying "That's not an unreasonable assumption, but what difference does it make?"

The thought quickly registered with us that if the binoculars were warehoused in such a way that the serial numbers of sold binoculars would be anywhere close to sequential, there weren't very many which left the warehouse before ours did. In other words, based solely on the serial number of our Razor HD, we thought it was possible that global sales of that model were a bit flat.

We don't know of many companies in the world which would completely overhaul a product model design, including a major upgrade, if it is selling well. Without speculating as to the reason why, we suspect that the 2011 Razor HD simply wasn't selling.

The serial number on our 2012 apo Razor HD binocular is 000601. If the binoculars are shipped without regard to sequential order, this would seem to be meaningless. If they are shipped relatively close to manufacturing sequence, it would seem to suggest that sales of the 2012 apo Razor HD were significantly more brisk than the 2011 model's were at introduction. (Our purchases of the 2011 and 2012 models were both received during the month of August — just one year apart.)

Let's consider why that might be — only focusing on those items which may be significant….

What About Possible Differences in Their Chasses?

The older Razors, while not at all bad and quite tolerable in the weight department by most standards, were admittedly a bit on the heavy side.

When coming up with the new optical system, we believe that the apochromatic design puts additional heavy, optical-grade glass into the binocular. This would necessitate reducing weight in the body if the design were to compete well with other binoculars. This seems like a primary reason for keeping the magnesium chassis while reducing the barrel diameter. This also seems like a good reason for going from what has been termed an "open hinge" design to a classic "H" hinge with the hinge only in the middle and likely shaving some weight off of the total.

Change in the Diopter Adjustment?

The somewhat more complex diopter adjustment through the center focus wheel of the 2011 model was abandoned in favor of the more simple and durable locking diopter ring by the right ocular on the new model.

We enjoy the ability to adjust the diopter setting from the focus wheel, but are the first to admit that it's more of a luxury than a necessity. The new apo Razor HD's provide excellent adjusting ability and lock when you've achieved your goal. It's a solid, time-tested design.

What About the Eyecup Difference?

The 2012 Razor HD binocular eyecups have significantly thinner walls when compared to the 2011 model. While this may be a matter of preference for some, we found that most users did not have either a strong positive or negative reaction to this change.

Even for those who like to steady a binocular by resting the tops of the eyecups against the top of the eye cavity (where there is bone just below the eyebrow), the change in eyecups did not seem to make a significant difference. It's something that one can't help noticing in looking at them, but not something that seemed to make much difference in practicaly use.

According to the manufacturer's specifications, the field of view for the 8X42 configuration shrank by about 26ft (8m) at 1,000y (1,000m) and that's hardly enough for a person to actually be able to discern in practice. The 10X42 configuration actually gained 32ft (10m) in its field of view — again, not enough for most people to be able to tell a difference in actual use.

We feel that a significant amount of the apparent increased resolution of details in the 2012 apo Razor HD comes from the apochromatic reduction of blurring or fuzziness on the line separating two colors.

In other words, while the resolution of details in black and white may be about the same with the 2011 vs 2012 Razor HD models, in actual field use a person is likely to perceive a significant improvement in the 2012 apo Razor HD's resolution of details. Is this significant? Yes it is when you consider that chromatic aberration is a major cause of poor performance in lower-priced optics.

Another color element in the 2011 vs 2012 Razor HD comparison is the presentation of the colors themselves. They come through as a bit more vivid, a bit richer, and a bit brighter with the 2012 apochromatic Razor HD than with the 2011 model.

When comparing our 2011 vs 2012 Razor HD binoculars, we felt that the 2012 edged out the 2011 slightly with a brighter view. The brighter view was not only evident in low light, but at all hours of the day.

We perceived the 2012 apo Razor as brighter and more enjoyable to use than the 2011 model in general. Those involved in the design of the 2012 Razor HD model told us that it is commonly perceived as brighter.

We perceived that the 2012 apo Razor HD might not be quite as good at controlling strong light or dealing with glare as the 2011 model. This would likely be a consideration if you expect to be using your optics while boating or when around snow and ice. 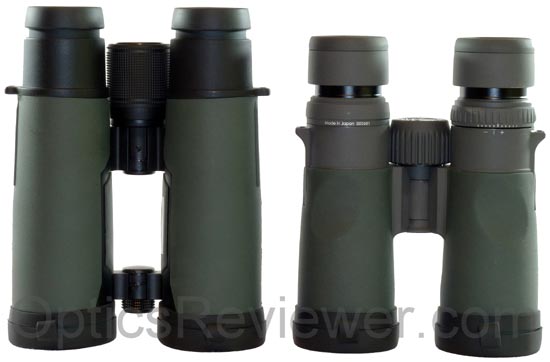 Individual Reviews of the 2011 and 2012 Razor HD Binoculars

Use this link for the lowest pricing we've seen for the apochromatic Razor HD binoculars: Amazon.com