A Binocular Tripod Adapter that's Easy to Use?

is easiest to use? For such a relatively simple, low-tech device, a person might think that they're all pretty much the same. What we've found, however, is that some are easier to work with than others. The design of some, for instance, makes them work well with Porro prism binoculars and not so well with roof prism binoculars. 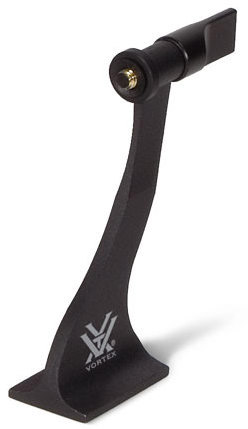 Nearly all the binocular tripod adapters use standardized fittings with a quarter inch threaded screw that goes into the front of the tripod-adaptable binocular's hinge. The other end of the adapter uses the common thread size for tripod heads. It's difficult to go wrong with this aspect, since both tripods and binoculars have been standardized in this respect.

To get to the adapter fitting on the binocular, a person will usually need to remove a plug that covers it for the sake of beauty. Most such plugs are made of plastic and simply screw into the front of the binocular hinge.

The ones that screw in and out are usually easily identifiable by the edge of the plug being knurled or otherwise roughened to provide an easy finger grip. You may find the occasional one that needs to be simply "popped" off, but please do check with the instruction manual that came with the binocular to see if it addresses this.

There are binoculars which are not made tripod-adaptable and for which another approach needs to be taken to use them with a tripod. Most compact binoculars are in this category and some in the mid-size range.

Why Use a Binocular Tripod Adapter?

Now the question becomes "Why would we want to use a binocular tripod adapter?" It's a fair question and one that's actually quite easy to answer.

When using a binocular, you'll notice it's not easy to read signs at a distance. The smaller the lettering, the more difficult it is to read because it's impossible for you to hold a binocular perfectly steady. This is true even when the lettering is large enough to read otherwise! Of course, you'll find that you're still able to read the words written with large letters, but it's the details that get all blurry and fuzzed up by those normal, tiny movements that come from such things as breathing in and out. (Try to stop that for a while and you'll soon find out what you're up against!)

It's the same with any other details you want to see. It matters not if you're a bird watcher trying to see the details to identify that new bird, a rural homeowner trying to see if someone is dumping trash on a side road, an investigator conducting surveillance, a target shooter, a hunter or an amateur astronomer. You'll see more details with your quality binocular when it's held perfectly still and the easiest way to hold it still is by putting it on a tripod — this is life. The thing to do is not try to argue with life, but adapt to it. In this case, it's easy enough to buy a tripod (our first tripod cost $7.00 on Craigslist!) and then put a binocular tripod adapter between it and your binocular.

Sounds easy enough, but is it actually that easy? To be honest with you, it takes longer to read this article than it takes to put your adapter on a tripod and then put your binocular on the adapter.

The Most Difficult Part

What's the most difficult part? In our opinion, it's knowing which of the tripod adapters is worth the money and will actually do the job well and we're about to make even that part easy! Once you've verified that your particular binocular is tripod adaptable, it's the perfect time to start thinking about an adapter.

For starters, nearly any "style" of adapter can be used with Porro prism binoculars since there is plenty of room between their barrels to fit even the thickest/widest of adapters. You'll find one or two adapters are simply a piece of metal bent to a 90° angle and a quarter inch stud to use in attaching the binocular as well as a place to attach it to the tripod and that will work for a Porro prism binocular. Be careful if you're shopping for this type of product, however, because they can be made so that the metal where it joins to the binocular is relatively thin and passes vibrations through to your binocular — and that's just the sort of thing you're getting an adapter to avoid!

If you're using a large Porro prism for amateur astronomy, for example, we like the Oberwerk Heavy-Duty Binocular-to-Tripod adapter.It's solid metal and priced quite reasonably for the quality when compared to some that look similar, but are made of plastic and consequently priced as low as 50% of the price of this one. You're likely to be disappointed in the cheaper plastic ones, since they won't hold your binocular very steady and that's what you're wanting to achieve, right? If you presently have a Porro prism binocular, but think you may get a roof prism later, we suggest saving a bit of cash by getting an adapter that you'll be able to use with either one.

A roof prism binocular's barrels are closer together than those of a Porro prism design. You'll want an adapter for a roof prism binocular to be a bit more slender so as to fit easily between the barrels and allow for a smaller interpupillary distance. It may be intuitive, but it's worth saying that you'll want such an adapter to be made of metal to avoid the vibration and shakiness of plastic ones.

You'll also want the stud that attaches the binocular to the adapter to have a knob that will be easy to use in the more restricted space between a roof prism binocular's barrels. Although the Vortex Optics tripod adapter pictured at Amazon is an old style and the current product has a long, flat knob, we find it works better for us when we're trying to tighten it in the tight spot between a roof prism binocular's barrels.

This tripod adapter is available at Amazon.com

Once you experience the view and see the astounding level of details visible from a rock-steady, tripod-mounted, good-quality binocular, we think you'll be sold on it!